Comments Off on Wireless Communications Is Key to Fire Fighters’ Safety 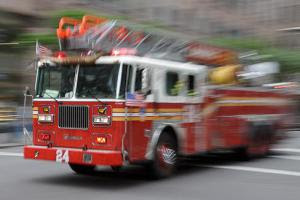 The summer season tends to dry out the grass and other vegetation, which allows lightening to have more of an impact on this foliage causing wildfires to break out more often than usual. When fire fighters head out to these fires, it’s imperative that they have clear connections to wireless communications so that they can remain safe and secure.
In Wyoming, Union Wireless is supporting fire fighters by locating solar COW (Cellular on Wheels) to a remote site in Carbon County to assist fire fighters who are currently fighting the West Battle Creek Fire. COWs are used to expand emergency service because they provided network coverage to a wide area that may not usually be covered.
In the Wyoming Business Report, Eric Woody, chief technology and operations officer for Union Wireless, explained that, “The firefighters within the command center will be using this system to receive updates on weather conditions and to provide feedback to the state and federal agencies supporting the field operations.”
This technology is very expensive but Union Wireless believes that without it the fire fighters would not be able to serve the community in the best way possible.
July 30, 2013 | Tower-Pro