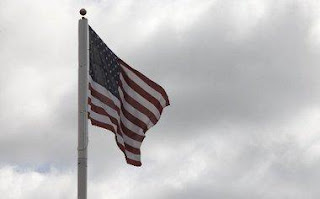 Off of Butler’s Main Street in North New Jersey, a section of the cell tower that is disguised as a flag pole is missing due to the violent winds of Hurricane Sandy. Even though this storm occurred over 10 months, the tower has yet to be fixed.
Steve Janoski of North Jersey reported that, “’It’s not for lack of trying,’ Borough Administrator, Jim Lampmann, said Thursday morning, and officials have made a number of appeals to the site owner, the Boca Raton-based SBA Communications Corporation, to have the 8-foot section replaced.”
While there have been plans to fix the cell tower, something always comes up to hinder the process such as a misplaced blueprint or a manufacturing issue. SBA is currently looking to add a fourth carrier to this tower and is waiting until negotiations are complete before they cover up the antenna.
“Residents at the adjacent senior citizens center have been lodging complaints about the deteriorating condition of the pole’s flag, which is partially torn, but it can’t be lowered until the plate is replace,” Janoski reported.
August 13, 2013 | Tower-Pro