» Missouri Residents Get A Glimpse At Future Cell Tower

Missouri Residents Get A Glimpse At Future Cell Tower 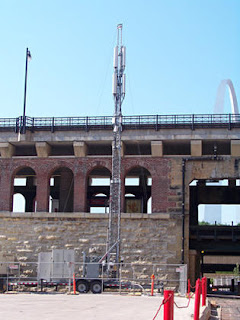 AT&T places one of their Cells on Wheels in the St. Louis area because of a fair and the influx of people that would be in the area. This tower looks similar to the ones that will be constructed in Cape Girardeau. The City Council still has to take votes on the second and third reading of the proposal for the permit for the tower so AT&T is bringing in temporary communication towers to boost cell coverage.
“We typically don’t deploy the COWs for the reasons we need them in Cape,” said AT&T Missouri regional director Marsha Haskell. “But it’s growing so much and there are so many customers constantly accessing the network that we felt we needed to bring them in to provide better service.” (Source: Southeast Missourian)
AT&T still has to wait for the council to approve the special-use permits for the COWs before they can be set up in Cape Girardeau. “The [temporary] structure behind city hall will be removed after the permanent structure on William Street is complete, likely sometime in January, Haskell said,” Samantha Rinehart of the Southeast Missourian reported.
These temporary structures are part of AT&T’s efforts to build up its network in Southeast Missouri. The network has spent approximately $3.5 million on the Cape Girardeau and Jackson area since about 2009.
August 14, 2013 | Tower-Pro