Comments Off on Lynchburg Finalizes Deal With City Regarding Cell Towers 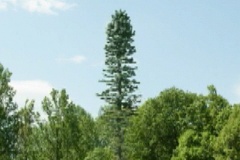 The city of Lynchburg, Virginia began finalizing franchise agreements to market properties owned by the city into potential telecommunication tower sites. The first tower that was proposed to be built near Perrymont Elementary School is going through the approval process. If built, this tower would serve customers for AT&T to begin with and equipment for other providers could be added later on. This 135-foot tower is planned to be disguised as a tree to increase the aesthetic appeal.
However, July 31st, the City Manager, Kimball Payne, announced the franchise agreement would not be submitted to the City Council on August 13thas planned. Payne believes they need more time to review the contract revisions that were submitted earlier in the week by Milestone Communications, the potential builder of the towers.
Milestone Communications is the leading developer of wireless towers in partnership with school and government landowners, enabling them to direct millions of dollars annually to educational and extracurricular budgets.  (Source:Milestone Communications)
August 1, 2013 | Tower-Pro