Comments Off on Heidrea Communications Rescue Osprey Caught in Tower 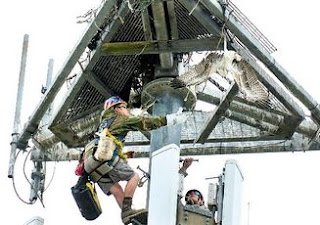 Photo courtesy of Cape Cod Times/Merrily Cassidy
A young, male osprey was saved Wednesday, July 10, by crew members of Heidrea Communications. The osprey was trapped in a piece of plastic and was left to hang upside down for about four hours before the crew could rescue him.
Jason Kolnos reported for CapeCodOnline.com that, “The young bird apparently was being raised with a few others in a nest on top of the multi-use tower, which is owned by Crown Castle International Corp., a Houston-based tower company.”
Ospreys make their nests out of materials they find including plastic, which is how the young bird got caught in the nest. “Scott Phillipo and his colleague, Chris Townsend, said they had never rescued a bird of prey like this from a tower but used harnesses and their safety training to get the job done,” Kolnos reported.
While the members of Heidrea Communications thought the bird hadn’t survived, they were relieved to see it start moving as they got close enough to release it. The osprey was released and taken to a wildlife clinic at the Cummings School of Veterinary Medicine at Tufts University for surgery, where he will be taken care of and then released into the wild or placed in another facility.
July 29, 2013 | Tower-Pro