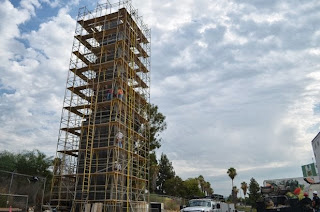 Verizon Wireless has decided to build a 70-foot high cell phone tower disguised as a clock tower in Glassell Park, Los Angeles. At first, Verizon decided to construct a cell tower and disguise it as a monopine, or a fake pine tree. However, residents didn’t like the idea of the fake tree and requested Verizon be a little more creative. The result is a clock tower that resembles those at LAX.

This project should be complete in early August, but it’s taking twice as long as it would have to build a monopine. However, the resulting clock tower will look a lot better than the fake pine tree and satisfy residents with good cell phone coverage as well as an aesthetically pleasing clock tower.
July 30, 2013 | Tower-Pro