» Cell Tower Up In Connecticut But Not Yet Functional

Cell Tower Up In Connecticut But Not Yet Functional 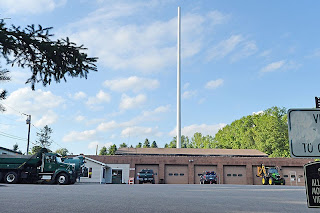 Photo courtesy of Bryan Haeffele and The Redding Pilot
In 2008, New Cingular Wireless Cingular Wireless PCS, LLC (AT&T) proposed to build a telecommunications tower at the town’s highway facility off Great Oak Lane. The Board of Selectmen approved the tower and it has now been built; however, it is not operational yet.
Susan Wolf reported for The Redding Pilot that, “First Selectman Natalie Ketcham said on Monday that David Vivian of New Cingular Wireless emailed that the tower is stacked and all of AT&T’s installation is complete. However, Mr. Vivian said the utility company has not yet completed its installation, ‘so the tower is not yet operational. We expect it may be another month or so, although this is something beyond our control.’”
This telecommunications tower is 180-feet tall and is disguised as a flag pole. This stealth design was a requirement of the lease with New Cingular Wireless. “The first selectman said on Monday the decision not to fly a flag on the pole resulted from discussion with other municipalities, whose officials indicated it would have a noise impact with the lanyards hitting the pole,” Wolf reported.
This telecommunications tower will be able to accommodate the major wireless communication providers in Connecticut. The town will be receiving $2,150 per month from the tower for the use of the land.
August 5, 2013 | Tower-Pro