Should Churches Be Allowed to Construct Cell Towers Disguised as Steeples?

Comments Off on Should Churches Be Allowed to Construct Cell Towers Disguised as Steeples? If you happen to be familiar with the nursery rhyme “Here’s the Church” then you may have asked yourself at one point or another, “what’s a steeple?” If you’re not familiar with the nursery rhyme it goes like this:
“Here is the church the church, here is the steeple
Open the doors and see all the people.
Here is the parson going upstairs,
And here he is saying his prayers.”
There are hand movements that go along with it, kind of like Miss Mary Mack. Anyhow back to the steeple, what’s its point? According to David England of the Religious Product News, “The vertical lines of the steeple helped to visually enhance the lines of the church, directing the viewers’ eyes vertically to the heavens.”
So if a church is going to use the architectural influences of the 1700s, then why not update it with technology from the 21st century? It seems rather efficient. However, some residents of Phoenix, Arizona believe a cell tower disguised as a church steeple is an eyesore and the President of the North Central Phoenix Homeowner’s Association Mary Crozier even said, ““Unfortunately, it doesn’t serve any religious purpose other than to line the pockets of the lease holder.” (Source: KPHO)
While some may believe this to be true, steeples have been around since the 18th century when King George I ascended the throne. “This verticality complements part of the mission of the church, to keep us in a heavenly frame of mind, but from an architectural standpoint, this vertical lift gives the architecture a more graceful and pleasing look,” England explains.
The 1996 Telecommunications Act took down unnecessary regulatory barriers to entry, such as governments denying the placement of cell phone towers for aesthetic or potential health reasons. A U.S. district judge also recently ruled that the city of Phoenix has no say regarding the construction of church steeples or what is inside them. Crossroads Church is in the process of constructing their steeple with a cell tower inside. The city’s legal department is going over the ruling to see if they can appeal or try to change zoning ordinances.
September 17, 2013 | Tower-Pro

Comments Off on Wisconsin Stealth Tower Alarms Nearby Residents A proposal to construct a cell tower disguised as a lighthouse or a clock tower has members of the Egg Harbor Village community concerned. AT&T’s 130-foot stealth tower would be erected in a parking lot adjacent to the Bertschinger Community Center, which houses village officials, a Door County Library branch, and the post office.
AT&T has offered the village a minimum of $800 per months in rental fees for the tower site and the tower would hold an antenna to provide coverage to the AT&T cell customers in the area. Other cell service providers will also be able to rent space on structure to improve their network coverage. Members of the community are torn between wanting better cell phone reception and the aesthetics of the tower. AT&T is going to provide additional details regarding the tower at the September 24th Plan Commission meeting.
September 12, 2013 | Tower-Pro On September 10th at 7pm there is going to be a public meeting to discuss the possibility of a cell phone tower being built on Cedar Shoals High School. AT&T has been expanding their network for some time, upgrading their current equipment to 4G LTE technology and constructing towers where coverage is an issue with customers.
AT&T believes that placing a tower at the high school will improve cell coverage in the area. The public meeting will be held in the Cedar Shoals High School auditorium. Many of the residents in the surrounding area have been pushing AT&T to increase network coverage and are pleased to hear about the potential tower being constructed.
September 3, 2013 | Tower-Pro

Environmentalists Worry Cell Tower Will Be Visible From Appalachian Trail

A cell phone tower is being built in Macon County, North Carolina in order to bring better wireless coverage to this remote region; however, environmentalists are concerned about being able to see the tower from the Appalachian Trail. The tower construction has already begun and the site is just a little more than a mile from the trail. The tower is going to stand at 170-feet and more than likely it will be visible along five or so miles of the trail.
“Any towers that stick up are unnatural looking,” said Morgan Sommerville, southern regional director for the Appalachian Trail Conservancy. (Source: Smoky Mountain News)
Many members of this community are upset because they feel that they had no opportunity to voice their opinion concerning this tower. These residents aren’t trying to stop the construction of the new tower, but make sure there are steps taken to reduce its visual impact.
“It isn’t a rare occurrence to see a tower along the trail,” Sommerville said. “We don’t oppose new cell towers, but we urge cell phone companies to be respectful of neighbors —and they can usually do that without great loss of coverage.” (Source: Smoky Mountain News)
August 29, 2013 | Tower-Pro In Nashua, New Hampshire the Board of Public Works is discussing the possibility of reconstructing the dilapidated Millyard chimney into a cell phone tower resembling the original structure. Two private companies expressed their interest in exploring the idea of installing a cell tower inside the chimney.
This project would solve the city’s problem of deciding whether or not to restore the chimney. Many of the residents of Nashua would like to see the historic chimney restore but it would cost the city hundreds of thousands of dollars.
Jim Haddadin of the Nashua Telegraphreported that, “Installing a cell phone tower inside the brick structure would allow the city to potentially reap income and also shift the burden of maintaining the chimney to a private company.”
It’s still undetermined what will happen with this project, but with two companies looking into restoring this chimney while adding a cell phone tower, the outlook is looking better than it did a few months ago.
August 26, 2013 | Tower-Pro

In Collier County, Florida a group of parents are upset over the construction of a 75-foot cell phone tower that was placed at Poinciana Elementary School. Many of the parents whose children attend this school were unaware that this project was occurring until they drove up to see the tower in the parking lot. Despite the FCC and the American Cancer Society’s conclusions that the low levels of radiofrequency that is emitted from cell towers isn’t harmful, parents still believe placing the tower so close to the school is unsafe for the children.
This tower was approved in April of 2011 by the student advisory council. Collier County School District now has 4 cell phone towers that generate around $58,000 a year.
August 20, 2013 | Tower-Pro First Presbyterian Church of Des Moines wants to obtain a permit to allow Verizon Wireless to construct a 120-foot communications tower that will be disguised as a cross. The church applied to the Zoning Board of Adjustment for a conditional use permit for the tower.
Emily Schettler of the Des Moines Registerreported that, “The permit is necessary because the church property is only 6.88 acres and the city requires a 10-acre lot for a communication tower. The board meets at 1 p.m. Wednesday at City Hall.”
August 20, 2013 | Tower-Pro

Comments Off on Brevard County Discusses Plan For Cell Towers 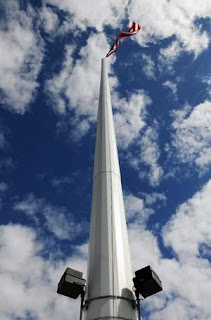 Photo courtesy of Tim Shortt
Tomorrow, Brevard County Florida commissioners will hold a workshop to discuss the issues surrounding the location of cell phone towers and other communication towers in the county. Telecommunications consultant, CityScape Consultants Inc, plans to make a presentation that focuses on a more systematic approach when it comes to the location of the towers so they do not run into neighborhood opposition.
Dave Berman of Florida Today reported that, “County planner, Geroge Ritchie, said county officials plan to discuss whether to begin more actively marketing county-owned properties as potential sites for cell towers, as a way for the county to generate revenue from leasing the land.”
The County Commission already votes on applications for new towers twice a year, rather than considering them throughout the year. This workshop is open to the public and officials of local cell companies, cell tower builders, and several county departments will more than likely be there to give their input as well.
August 14, 2013 | Tower-Pro