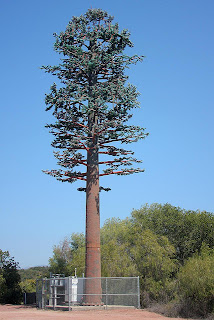 AT&T has proposed to build a 162-foot cell tower near some of the high-priced houses near Newtown. The tower would be disguised as a very large pine tree. Members of the community are referring to this potential cell tower as “Frankenpine.”
MariAn Gail Brown of the News Times reported that, “The tower would be about 162 feet high, well above the two-story maximum of the houses in the neighborhood, documents submitted to the Planning and Zoning Department show. Some homes are as close as 900 feet from the proposed tower.”
Cell phone coverage has been spotty around Fan hill Road and after the tragedy that occurred at Sandy Hook School, people started to realize the issues regarding cellular reception in that area.
Monroe First Selectman Steve Vavrek said. “Certainly, nobody wants anthing like this in their backyard. But we have to have better communications, especially around schools, and this is something that is very sorely needed and long overdue.” (Source: News Times)
In December, AT&T installed a temporary mobile wireless tower to help police maintain constant communication with the three schools that were located in the dead zone. This proposed tower will eliminate those dead spots and boost cell coverage in the area.
August 12, 2013 | Tower-Pro